Can You Feel it?

Lyrics from the song, “Thing of Beauty” by Hothouse Flowers hit me hard the other day. 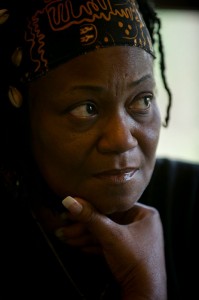 I thought immediately of Winnie Smith, one of the soldiers who attended a SongwritingWith:Soldiers retreat in Texas. She had written me a letter after the retreat, saying how the experience surprised her, opened up a part of her that had long been buried. “As I sat outside, by myself, I became aware that I saw roly-polies . . . As I walked, I realized that I was hearing the leaves crunch under my feet.”

“A thing of beauty is not to be ignored
Can’t you see it in the secrets of the dawn?
Can’t you feel it in the place that you come from?”

As I continued to listen to the song, I thought of how Winnie, after reclaiming that missing piece of herself, could no longer ignore the beauty of life all around her. From tiny round insects on the ground, to the sound of leaves on a crisp fall day.

Opening up means allowing the world in. It is a leap of faith.

I think of all of the service members who have participated in our program and the courage they show when they push past their internal obstacles and let their songs out. Their willingness to do this and the songs that emerge are nothing less than things of beauty.

Each time we bring together service members to help them transform their experiences into songs, we witness the movement from apprehension to relief and often to elation. What makes this possible? A genuine respect between two people, a willingness to listen deeply and speak honestly about the human experience. To share without fear and to listen without judgment in order to create something together.

The collaborations that happen in workshops and retreats are testimony to the beauty of the human spirit.

And the songs that result?

They should not be ignored.