Here is Palermo Deschamps – participant in the April retreat. 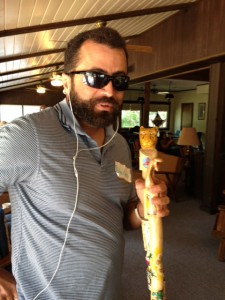 He’s holding one of two walking sticks he brought with him. He carved them himself. 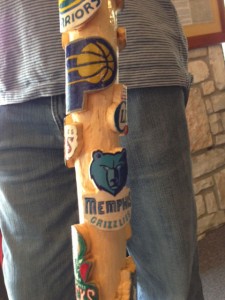 I know he is a sports fan so I texted him during the NBA finals, saying – “Can you believe this series?”

I got this message from him yesterday –

“Take a look at my latest artwork, tell me what you think.” 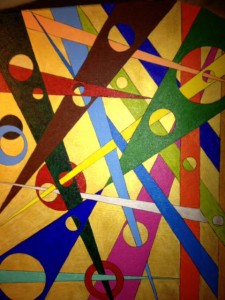 “It is acrylic and was an inspiration I got watching game seven of the NBA finals.

The different lead changes, the holes in the players’ games
The perfection on some of the shots and the diversification of all of the players.

The golden background represents the final goal, which was to obtain the trophy and being named champion. I was sitting in my recliner and started it about the middle of the second quarter.”

He was nervous coming to the retreat. His carved walking sticks were a great ice breaker.

By the time he left, he had written, “I’m Soldier” “Fallen Angel” and “Involuntary Erection.”

I am going to call him Prolific Palermo from now on.

This morning I asked him – “What do you think the songwriting retreat did for you? For Lucia?” (his wife)

Within minutes a reply:

“Well, for me, it helped me to communicate some of my feelings with strangers, which at the same time helped me relieve some of the guilt that I had been carrying with me during all of these years.

For Lucia, I think it allowed her to see that just like me there are many other members that are struggling on a day by day basis with the issues that continuously hunt them in their dreams, as well as during the days.”

He answered: “The songs help immensely. It allows me to indicate to others a brief part of what I experienced down range without having to talk about the particular events.”

To listen to Palermo’s songs and help us offer our program to as many veterans as possible, please make a donation to the cause, purchase the digital album.”