At SongwritingWith:Soldiers retreats, veterans talk a lot about being inspired—inspired to share their stories with the songwriters, inspired by each other’s courage in opening up, inspired by the powerful songs written, inspired by a new community of friends.

Recently, I heard Megan McDonough, co-founder and CEO of the Wholebeing Institute, speak about challenging ourselves to take inspiration a step further. To consciously work to outspire. How can we take our inspiration and do something helpful with it?

The inspiration sparked in participants at retreats is easy to see. Her words gave a deeper meaning to something else that has been resulting. The “out-spiration” from participants that ripples in ever-widening circles to positively impact others.

Today, as I look through the names of new veterans coming to our next retreat, I am filled with awe. More than half have been referred by former SW:S participants. And nearly all of our creativity and relaxation workshops will be led by returning SW:S veterans or military spouses in areas such as videography, photography, creative writing, yoga, Zentangle, and a few surprises (to be revealed after the retreat!).

After attending an SW:S retreat for military couples, Benny and April Rodriguez received their post-retreat package with a CD, photo/lyric book, and DVD. Several weeks later, they participated in a follow-up group phone call that I led. “I’ve memorized every song from the retreat,” April said. “I play the CD all the time!” 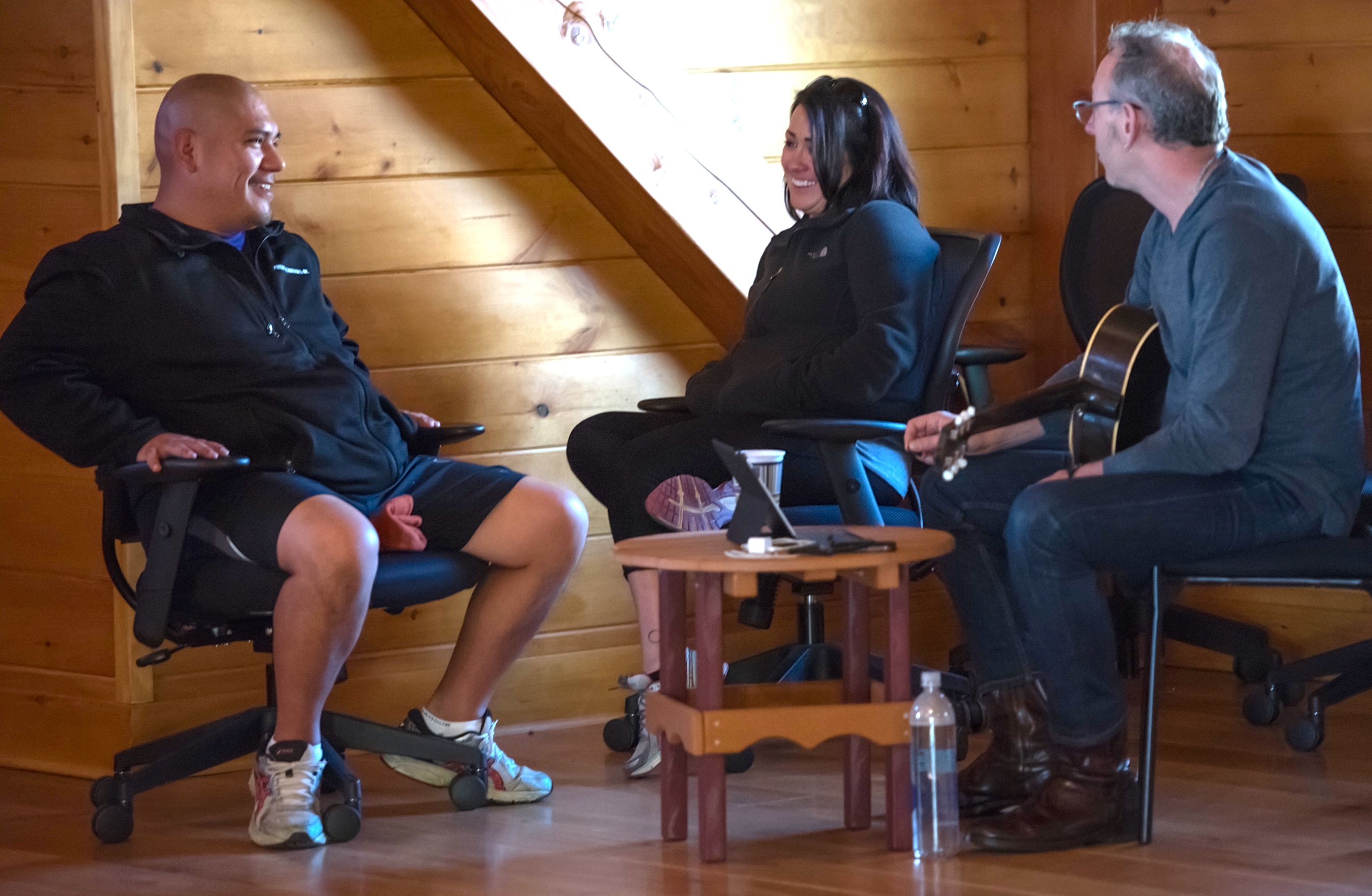 Benny said, “When I hear the songs written by everyone else, I feel closer to them. I can remember being with them at the retreat and it keeps me feeling more connected to everyone.” Benny went on to say that he played a song written by the wives at the retreat called “The War After the War” for a group of male veterans he was working with. “I thought it would be helpful for them to hear how the wives often felt,” he said. Talk about continuing service!

Benny had been through a very dark period before attending the SW:S retreat. But now, he said, he is taking guitar lessons, hoping to be able to play his own song one of these days. “Darden may be out of a job soon!” he laughed.

When SongwritingWith:Soldiers returned to Boulder Crest in Virginia for another retreat, Benny and April came for the Sunday concert to support the other couples and hear their songs. They brought their daughter with them and all three helped set up the lodge for the final performance.

“We are here to help any way we can,” April told me. “I honestly don’t think we would be where we are today if it wasn’t for this experience.”

More and more participants are referring peers to SW:S and returning to share professional skills. Others are building their creativity and connections independently at home, like Benny with his guitar lessons, or with his family – “I sing with my daughter while we are cooking.” Some are pushing past their comfort zones in public: “I’m trying out for a part in a play.” “I went on a group motorcycle ride across the state.”

With every SongwritingWith:Soldiers retreat, inspiration is being beautifully transformed into outspiration, reaching and helping others in all kinds of ways. I can only imagine what ripples will emerge from this next retreat! Stay tuned!