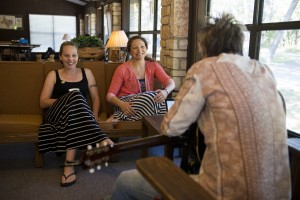 What would happen if you put 15 soldiers and 4 professional songwriters in a retreat center for 2 1/2 days, and asked them to write songs together, with the sole purpose of getting the veterans to open up and talk about their time in the service? So the songwriters could turn their soldiers stories into songs?

Well, I am a songwriter who has had the great honor of writing with soldiers in that scenario, and what I learned in the process of working with the vets has helped me to understand what songs are truly for, what songs have the power to do in the world. Working with the soldiers has helped me to understand my job as a songwriter on a much deeper level than any work I’d done in the music business prior.

Here’s what I learned.

Songs build bridges over broken human connections. They help bring us back in when we are removed, show us that we are not alone. They reassure us that our deepest fears –that no one has ever felt the way I do before, that no one could understand what I am going through, that I am totally and utterly alone — are not true. We humans are so very much alike on the inside, and songs announce to the world our universal human condition, through their lyrical and melodic expressions of how we feel. They are timeless, weightless, and can’t be seen, but they are the great human connectors, and when you recognize yourself in a song, you know you are not alone.

I’ve come to see songwriting as the process of a soul trying to heal a heart. It’s that simple, and that mysterious. They come from a spiritual place, a place outside of our conscious understanding. They come up from our subconscious, from another world, a beautiful world that artists reach for and point to in all the arts.

Songs make beauty out of the beast.

Songwriters often speak of songs coming through them, not from them. The great songwriter Harlan Howard (I Fall To Pieces, Busted) used to say, “I don’t write them, I just write them down.” We songwriters are the lightening rods, not the lightening. Sure, we must work hard, and let me tell you, it’s a real job, but in the end, we are students working inside the schoolhouse of a mighty mystery. And what we are doing, our highest contribution, is to help ourselves, and others, heal.

Songwriting is empathy, for self and for others. Songs are a soul expressing itself.  Songs are like white blood cells, coagulants for the heart/soul. They come rushing in when there is a wound. Songs often come to a songwriter to help heal emotional blows so low that their frequencies reverberate in a body and soul for a lifetime.

At their best, songs are not products for a market place. They are spiritual medicine for a world gone wrong. Humans can get out of sync with each other, out of rhythm. Trauma does this to us in an instant, removes us from our life, and it removes us from each other. Songs can help us return.

The soldiers came to the retreat wounded, inside. Removed. Traumatized. I doubt you can live through combat without being traumatized. War is traumatic. Songs are a way past a menacing babble of closed frontiers, into the possibility of mutual comprehension. Deep resonance with each other is possible, when we sing together, and show our hearts in song. Songs help re-set the balance, in the direction of connection, truth, and freedom.

But by their nature, soldiers don’t like to talk about what they have been through. Silence is a soldier’s code of honor. Soldiers never speak of their world, those who have seen combat do not talk about it. Those who talk about it have not seen combat. The soldiers knew what they signed up for, and coming out the other side of it alive is enough. They don’t want to discuss what they’ve seen, what they’ve done. No need to share the details with civilians. Soldiers don’t want to tell their stories to people who have not been there. Soldiers talk to soldiers, if they talk at all.

So asking a soldier to talk to songwriters is a stretch, but that’s what we were up to at that retreat center, and the goal was to get a song written for every solider there. After the initial hellos and small talk, we got down to business. The first soldiers I spoke to seemed very close, two women vets, who sat close, whispered thoughts into each others ears, held each others arms, gave off the body language of two people who were very committed to their friendship, who had been through a lot together. I asked them if they were battle buddies, and the answer I got became my first song I wrote with soldiers, I Got Your 6.

“You know,” the soldier said, without emotion.

“I got her back. She’s got mine. On the battlefield, 6 o’clock is always behind you, 12 o’clock in front. To have someone’s 6 is to have their back.”

And in wartime, to have someone’s 6 means you’d die for them. When the weight of that hit me, I knew I was entering another world now, a world I knew nothing about. I got my first glimpse into Soldier’s world, a world where people die for each other. This is what soldiers do, it is their duty, commonplace, not astonishing. In order to survive, soldiers must be willing to die for one another. And part of their deep bond is the survivor’s guilt, the aching memories of those they’ve lost, they carry that weight everywhere they go.

Through the healing mystery of song, we were able to tap into their stories, the ones we were told, and the ones we were not told. We managed to get a song written for every soldier, all 15 of them. As we played them their songs. the soldiers faces opened up, their eyes lit up, their hearts opened up, They sang with us, we cried together, we laughed together, we saw each other’s hearts. We connected. And in this connection, with the songs recorded for them to take with them and keep forever, I think we were able, through song, to bring a few soldiers a little closer to home.

6 o’clock is always behind you

6 o’clock on the battlefield

6 o’clock is black as gun smoke

At 6 o’clock our deal is sealed

No need to talk or testify

Just keep your story tucked inside

No a savior on a crucifix

Look in my eyes I got your 6

Guilt, a ball and chain

At 6 o’clock I’ll hold your pain

No need to talk or testify

Just keep your story tucked inside

No a savior on a crucifix

Look in my eyes I got your 6

At 6 o’clock I will defend you

At 6 o’clock just call my name

And I know you’d do the same

6 o’clock on a battlefield

6 o’clock is black as gun smoke

At 6 o’clock our deal is sealed 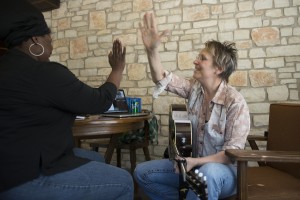