I’m a person.
I’m an American, and damn proud of it.
I’m a Texan, and glad I live here.
I’m a Veteran, and thankful for all the amazing experiences I’ve had because of my service.
I’ve been diagnosed with PTSD.

No single one of those statements defines me. They’re all a part of who I am, aspects of my personality, the choices I’ve made, and the choices I still continue to make. I’m not a victim, I’m not a “walking timebomb” or a stereotype.

After the Headline News Robin Meade Fourth of July special about SongwritingWith:Soldiers came out, I had a lot of veterans reach out to me, and the vast majority of the response from them was positive, but I got a bit of a different response from someone whose opinion really matters to me, let’s call her “CPT S”. She’s a combat vet, too, and saw some serious action back in OIF I. (In the song I co-wrote with Jay Clementi, “Call to Prayer” the line “it’ll make, or it’ll break, your faith” was inspired by a conversation with her.)

CPT S told me, “I’m wary of the vet as victim dialogue. I had one guy tell me after learning I was a vet: Man, you must be f***ed up. I told him I don’t want sympathy.” I think she has a valid point, so let me say this: I’m not a victim, I choose not to be, just as I chose to serve. All of us, every single one, made the choice to enlist or (in the case of the only draftee I served with, CSM(R) Jeff Mellinger) re-enlist and serve our country. That says a lot about the character of the men and women I served with: we all chose to serve (as another of the SongwritingWith:Soldiers’ songs put it) “Something Bigger Than Myself,” and in a world that celebrates and publicizes the selfish narcissistic aspects of society (“Keeping Up with the Kardashians” ring a bell with anyone?) that’s a noble rarity. 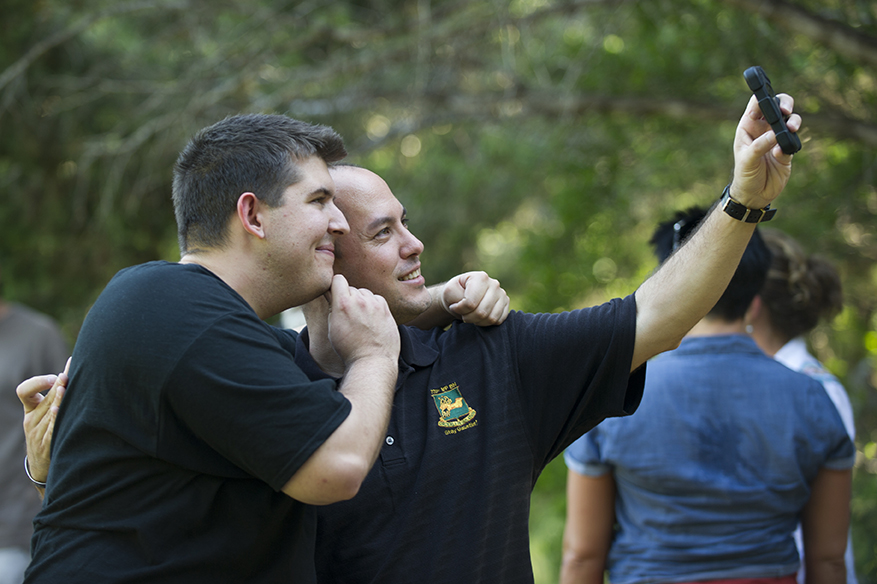 For all the “support the Veterans” talk that you often hear around this great country, there is also the stereotype of the “damaged Veteran”, the ticking timebomb that’s just waiting to snap, the loner that refuses to integrate into society as a whole. Are there Veterans like that out there? To put it bluntly, yes, there are. But you know what? They’re a rarity. In fact, as more and more studies show, Veterans as a whole are more successful, more involved in their communities, more emotionally resilient, and more adaptable.

I’m sure many of you have heard or read about the the increasing rate of Veteran suicide. Is it a problem? Damn straight it is, and it’s one we need to look into and engage our Veterans to turn around. The funny part about it that no one seems to talk about, though? It isn’t just that Veterans are committing suicide at much higher rates than before, but that the suicide rate is approaching that of the general population. That’s right, even with Veteran suicides up exponentially, the Veteran suicide rate is still lower than that of the civilian populace for their age, region, ethnicity, and income groups.

I’m not saying we don’t have Veterans who are in trouble, who need the help and guidance to reintegrate with society, to grow from their experiences rather than having their experiences restrain them, and groups like Team Red, White, and Blue, SongwritingWith:Soldiers, and a hundred other local and national organizations are working hard to engage with those Veterans to get them the help they need so they, too, can share of the success that the vast majority of Veterans are enjoying.

That reminds me of another stereotype and Veteran/Soldier myth I’d like to address, that of the “you’re only serving because you don’t have any skills/education/etc.” I didn’t join the Army looking for a career, I already had one. I’d spent over a decade working in IT before I enlisted, and had risen to a senior management position in the world’s largest webhosting company before I raised my right hand and swore the oath to protect and defend. I served with Soldiers who left successful careers as CPAs, lawyers, doctors, mathematicians, cops, and a dozen other well-paying careers, all because they felt called to serve. And you know what? Those that have gone back to civilian careers have, to a man, excelled. As I talk to the friends I deployed with who’ve gone back to civilian life I hear over and over again the same story: faster than normal promotions, exceeded expectations, success, over and over.

We’re not victims, we’re Veterans, and for the same reason: It’s the choices we made and continue to make.

Having said that, if you’re a Veteran and you’re having a hard time, make the choice to reach out. You’re not alone, you never are. You have brothers and sisters who’ve worn that same uniform, who’ve been through the same things you have, who are there to help, there to listen. We don’t leave our own behind, whether in a foreign land on the battlefield, or here in the United States on the street. We’re family, and we take care of our own. If you don’t have anyone you feel you can talk to, I’m here for you anytime, just reach out.