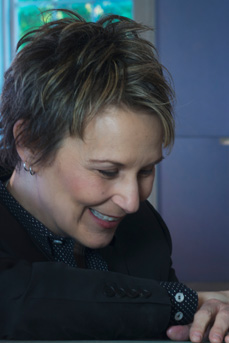 In a Nashville bookstore, to the tune of steam hissing from a latte machine and laptop taps of nearby browsers, she speaks in a low voice, yet communicates urgently. Her voice never rises. Her music never rattles rafters or crashes like cymbals toward the high notes in a power chorus. Her tempos shuffle and trudge more than they dash.

And her songs? They’re about as idiosyncratic as anything in the wide world of “popular music.” They’re painfully personal, especially on Trouble and Love. Yet they somehow infiltrate the souls of her listeners, no matter how different the paths they’ve followed through their lives.

Those songs weren’t so much written as harvested by Gauthier. Though she lives not far from the hit-making mills of Music Row, she admits to knowing nothing about how to write on command.  She says, “I have to be called to write. The call comes from somewhere I don’t understand, but I know it when I hear it.”

That call first came to her a long time ago. Her life to that point had led her to extremes, plenty of negatives and a few brilliant bright spots. An adopted child, who became a teenage runaway, she found her first shelter among addicts and Drag Queens. Eventually she achieved renown as a chef even while balancing the running of her restaurant with the demands of addiction to heroin.

Two more successful restaurants, an escalating addiction, and a subsequent arrest, led her into sobriety. All that was rehearsal for what to follow, when she wrote her first song in her mid-thirties.

From that point, Gauthier channeled a long line of works, almost all of them eloquent in their insight, burnished by her writing technique. A core of devotees came to await each next release. Their wait ends, for now, with Trouble and Love.

This time, Gauthier’s songs rise from what she describes as an especially dark period. “I started the process in a lot of grief,” she explains. “I’d lost a lot. So the first batch of songs was just too sad. It was like walking too close to the fire. I had to back off from it. The truth is that when you’re in the amount of grief I was in, it’s an altered state. Life is not that. You go through that. We human beings have this built-in healing mechanism that’s always pushing us toward life. I didn’t want to write just darkness, because that’s not the truth. I had to write through the darkness to get to the truth. Writing helped me back onto my feet again. This record is about getting to a new normal. It’s a transformation record.”

The heart of that transformation, beating within Trouble and Love, is love. But it’s not the kind of love that’s celebrated on pop charts. In those tunes, love is its own end; the story stops as the giddiness sets in, with no hint of what may follow. Gauthier knows better; she has the scars to prove it.

“For me, love has been a real challenge,” she admits. “Attachment has been a challenge. This record is about losing an attachment I actually made. The loss of it was devastating because I hadn’t fully attached before to anyone. The good news is that I can. The even better news is that I can, and I can lose, and live. Not only do I live, but I’ve got a strength that I never had before.”

Trouble and Love would fall or rise on the question of whether it crystalizes Gauthier’s experience and conveys it to those who want to feel it, as if the poetry of her lyric can mirror and illuminate what they too have gone through. To help make this happen, she invited a small group of singers and musicians into Nashville’s Skaggs Place Studio, each one chosen because of his or her ability to find the heart of the song. No one was given a lead sheet or an advance demo or even headphones. The backup vocals were invented on the spot. The microphones were vintage, and the songs were cut live, to tape. Everyone stood together in the room, playing to what they heard in the lyric as well as from what was going on in the moment.

“I took away everything that musicians lean on to feel invulnerable,” she explains.

All they had to work with was a brief rundown of each song from Gauthier in the control room, right before the tape rolled. “I wanted them to feel it in real time,” she continues. “You don’t want to sound real with songs like this. You want to be real. That’s what I strive for as a writer, and that’s what we got in the playing.”

Feeling their way through the process, these extraordinary participants — guitarist Guthrie Trapp, keyboardist Jimmy Wallace, bassist Viktor Krauss, drummer Lynn Williams and singers Beth Nielsen Chapman, Ashley Cleveland and Darrell Scott, Siobhan Kennedy and The McCrary Sisters — probed and then brought life to Gauthier’s compositions. In their hands, and in her fearless vocals, the songs resonate like tolling bells.

We hear “a body’s but a prison when the soul’s a refugee” in Oh Soul. The last embers of affection flicker and die on When a Woman Goes Cold, (“Scorched earth cannot burn.”) “A million miles from our first kiss, how does love turn into this?” is just one of the bitter riddles posed in False From True. Irony colors the chorus of Worthy: “Worthy, worthy what a thing to claim. Worthy, worthy, ashes into flame.”

This is deep and dangerous poetry, and Gauthier leads us through it with relentless candor. Yet tenderness is always near, enough to keep us engaged through the final track, “Another Train.”

“I wrote that one in England during a long, long tour,” she remembers. There was a sign at a station: There’ll be another train at 14:02.’ So I started working with ‘another train.’ The song evolved. It doesn’t start the way it ends. It zigged and it zagged. I let it talk to me. It’s so interesting, because when I saw ‘another train,’ boom, that whole story was in there — but I had to go find it. I had to dig, like an archaeologist.”

In the very last line of the song is the benedictory thought of the entire album. “Another Train” bathes all of what preceded it in a glimmer of hope. It a fantastically concise and powerful ending — and entirely intentional–  “There’ll be another train.”

“This album reflects a total human experience. Love, loss, and a life transformed.” Gauthier sums up. “It’s not a random collection of songs. This record is a story. It’s about trust and faith and believing that there’s a plan and a flow. And the flow is where the good stuff is because there’s wisdom in the flow. At the core, we’re all cut from the same cloth– the same dreams, the same brokenness, the same desire for companionship and family and home. Yeah, we all have that. And if I don’t go deep enough into that, it’s a problem.

“There’s no such thing as going too deep.”