“I merely took the energy it takes to pout and wrote some blues.”
Duke Ellington

Few things are more powerful than turning a hurt into something that feels good. It’s something our souls yearn to do, but it isn’t always easy, and often we aren’t very good at it. In trying to feel better, we buy too much stuff when we are lonely. We overeat when we are blue. We over play. We over work. But sometimes, we get it right, like Duke Ellington choosing to make music.

What is it about the blues that can make us feel so good?

We don’t all have the talent of Duke Ellington who could turn his “pouting” into heart melting songs, but we do seem to have a natural pull toward the healing powers of music. There’s a comfort in music’s universal chord that has drawn our souls for as long as we’ve been around. I know I’ve been drawn to it for as long as I can remember.

I was six years old when I was told that my 18-year-old cousin had departed to Vietnam. My little girl self couldn’t imagine how scared he must be or what kind of horrors he would face in war. I told my little brother about it and, within minutes, our uncertainty had found its way into a chant as we marched around the backyard singing, “Tim is in the war. Tim is in the war.”

So when, more than 40 years later, my old friend, singer-songwriter Darden Smith told me he was going to write some songs with veterans, I asked if I could tag along. The writer in me loved the potential content. The mother, sister, cousin, friend in me was drawn to the stories of the veterans. What would they talk about? How would Darden handle it?

The stories flowed. The muse — what Duke Ellington gently called “pouts” – here was a collection of fear, pain, love, loss, and awakening. To witness my friend listen, relate, and turn the soldiers’ stories into songs was life changing. I was filled with respect for him and also awe at the powerful impact of songwriting. I was grateful that Darden had devoted his life to mastering the craft.

Any of us who has ever tried to create something (all of us) knows how much energy it takes to do it, to do it well. Same with listening. To really be there, to hear someone’s pain, worries, and glories, takes focus, heart and stamina. I saw all of this and more in the soldiers and the songwriter.

Darden and I knew from that initial songwriting experience, that the power of collaborative songwriting was something we couldn’t ignore. From those first songs to the many that have been written through our SongwritingWith:Soldiers retreats, we have no doubt that the energy spent is life changing for many.

I received the following note from a soldier songwriter from our April retreat:

“I listen to these songs all the time. I don’t know what it is about them, but they are helping me heal. They have jump started something.”

Energy. Jump-starts. Healing. Songs. The common threads keep resounding. To hear these words, from a man who has done multiple combat tours, is to me the sound of a better world.

I say, whatever our worries, fears, pains, and triumphs, let’s “do the Duke” more often and turn our energy toward creating, collaborating, and sharing.

Help us collaborate with more soldiers,
make your donation to SongwritingWith:Soldiers today. 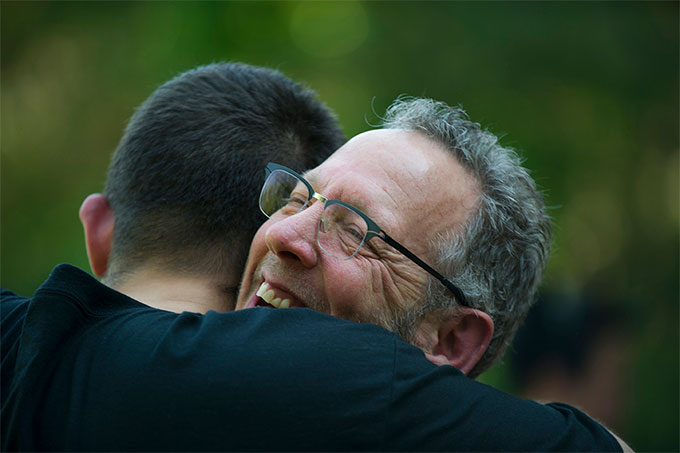