What About The Wolves?

He stared at me, his eyes silver blue, intense. I could tell he was gritting his teeth behind his slight grin, jaw muscles pulsating. He thought he’d gotten me.

I knew this was coming eventually, being cornered and questioned by a combat veteran during a SongwritingWith:Soldiers retreat – and this one was an EOD Marine who’d been deployed multiple times since 9/11, whose work with explosive ordnance disposal constantly exposed him to the hair-trigger threat of being maimed or seeing the brutal effects of a bomb…or worse. This was a guy whose job was to render safe procedures while facing the possibility of his life blowing up, literally, countless times.

The veteran’s piercing gaze came after watching a documentary called HAPPY which features vignettes of people discussing what makes them happy and interviews with researchers who study what happens when we are. I screen the film when the retreat participants aren’t writing songs, either to prime them for the process or build upon the positive effects of their collaborations. The film demonstrates that it isn’t selfish but actually strengthening to work at being happier. The irony of screening this documentary for combat veterans is not lost on me. I am always a bit tentative before pushing the “Play” button, but I always do. For me, happiness has become a matter of national security.

When the film ended, he folded his arms across his chest and said, “So this is all great for some people, but what about the wolves who come growling at the door?” At that moment, I saw a man who was desperate to find a way to be stronger than the pain he was enduring far more frequently than he let on. What he was really asking was, How do I carry on? How do I live with the wolf inside? 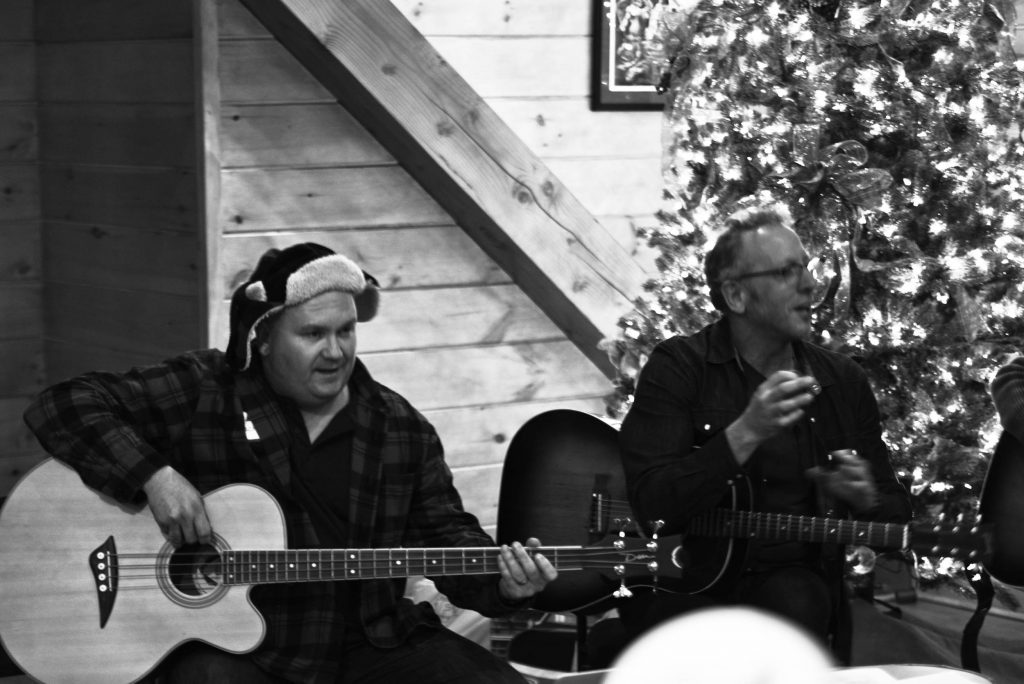 Throughout the retreat, this veteran had worn his plaid wool hat with furry earflaps, a jokester’s twinkle in his eyes as he openly hugged and bragged about his wife. Until this moment, he appeared to be “fine.” But now, I sensed why his wife had coaxed him to attend. Years of hurt and anger were nearing the surface. Twenty two suicides a day, his gaze seemed to be whispering.

What about the wolves? He’d asked and was holding me accountable for an honest answer about the possibility of happiness. How could anyone ever be happy after marching around minefields of blood and death?

“Wolves,” I said. “Yeah. We’ve all got our version. They differ from one person to another, but we’ve all got them. It is the species that lurks, waiting to attack, always out there. Some seem far worse than others – I don’t want yours…but you probably don’t want mine.”

I was diagnosed with Rheumatoid Arthritis when I was twenty-five. I had just begun my career and was about to get married. About to walk down the aisle with the man I loved and could hardly walk across the room. Suddenly, rather than a giddy bride-to-be, I was eyeing my hands every day through tears to make sure the red, throbbing knuckles weren’t swelling to the point I’d have to remove my ring. Instead of trying on satin shoes, I was being fitted for orthotics and braces for my wrists. I set them all aside on my wedding day along with pain pills because I didn’t want to spend the day all doped up. Sadly, I danced in agony at the reception, too proud to tell anyone I was in pain. Three years later, I had to quit my full time job.

He nodded, knowingly, rubbing his knees, so I went on.

Ten years ago, I began getting IV infusions every eight weeks. Something early on I thought I would never do, commit myself for the rest of my life to some medical office, tied to an IV for hours a day with a bunch of other sick people. But the pain and fear of crippling got me there. I see a lot of RA-related depression in those rooms and know that I have to keep pushing past it. Easier said than done. But when I make myself go for a walk, hang with a friend, garden, put on my favorite music, paint, write a letter to someone I love, I am much stronger. I work really hard to stay happy. And every time I do something with the purpose of feeling better, I am looking that wolf square in the eye and feel stronger. That’s why I am passionate about helping others find what makes them happy. It is good for all of us. I could never do these retreats, physically or emotionally, if I wasn’t feeling good, I told him. With me feeling good, the retreats are better for everyone.

I wouldn’t be running a songwriting retreat for veterans. I wouldn’t be sitting across from this brave and honest man having one of the most important conversations of my life.

What if we all gave in to the wolves? I said.

My face must have shown my concern. His eyes and posture softened. I think my honesty about my own pain and challenges gave me enough credibility in his warrior mind to allow him to hear what he’d been yearning to hear. I believe he wanted to feel that there was a way forward, some sort of purpose for all he was dealing with. That working hard on happiness has a ripple effect in the world. I know that is what I wanted years ago when I stared at my randomly bulging joints, my own monster from within.

I stepped closer, trusting what I’d learned the hard way and later by studying resilience research. “We both know the wolves can be hard to control,” I said. “That is why it is so important to keep plenty of non-wolves around, things that make us feel good so that we can stay strong.” He didn’t roll his eyes, a good sign. It was my turn to render safe procedures. “I’m assigning you a duty,” I said. “Pay attention to times you feel good. What are you doing? Make time for it. Let your family know when you are happy. This is how you stay in shape to better battle the wolves.”

He took a deep breath, stood up, saying nothing.

I put my hands on his shoulders, like I do with my son when I really want him to see me caring about him. “Do you think you can supplement your armor with things that make you smile from within?” I said. “Like playing the guitar. . . and your goofy hat?”

We both laughed. His eyes were glistening. “You’re a strong woman,” he said, and gave me a hug. “We’ll talk more.”

Later, when the professional songwriters performed everyone’s newly written songs, I watched this veteran pat his wife’s shoulder as they listened. When it came time to hear the song they had written together, he rose, grabbed a guitar, sat down with the pros and played. His wife was beaming. His wolves were retreating, at least for now.