Working with Others for the Greater Good = Joy 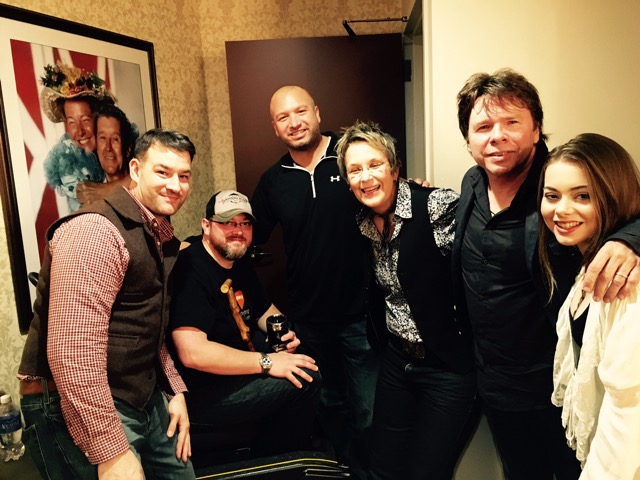 I was honored to perform at the Opry At The Ryman on November 28th, which just so happened to be the Grand Ole Opry’s 90th birthday.

I brought some friends with me. Iraqi war combat veteran Josh Geartz (who co-wrote the song we played) and singer-songwriter James House, both of whom I met through SongwritingWith:Soldiers, and fiddle player Kate Lee. The Opry band and the Opry singers also joined us onstage.

It quickly became a night for the ages.

As I sang the first lines of the song the room became electrically charged, I could feel people emotionally reacting to the words.

Looking back now, who the hell knows
Where the soul of a dead soldier goes

Josh sat on stage right and laid down beautiful harmonica parts, then as James and Kate and I sang the words of the first chorus, I felt an even deeper energetic tightening.

I shouldn’t be here you shouldn’t be gone
But it’s not up to me who dies and who carries on
I sit in my room, and I close my eyes
Me and my guardian angel are still on the ride

The sold out Ryman had converged. Audience, musicians, employees and ushers had become one, mesmerized by the power of Josh’s story. I glanced down at the front row, and men were fighting back tears, transfixed, and empathizing with the hell Josh and other veterans have gone through. James and Kate and I finished singing the second chorus, then KABOOM, the drums and bass came crashing in loud for the solo, raising the hair on the back of my neck and almost lifting the ceiling off the Ryman. It was glorious music, expressing the will to live, the urgency of our need to believe, uplifting, defiant, hopeful in the face of trauma and loss. I looked over at Josh, wireless mic in hands, harmonica between his lips, and he looked over and smiled at me under his hat. It was a moment I will never forget.

As the last note of the song rang out, the audience jumped to their feet, many with tears on their cheeks. They clapped and cheered, the house lights came on and off, and the clapping and cheering got louder. The band looked at Josh, put their instruments down, stood up, and started clapping. I did the same.

It was a classic Opry moment, a sustained standing ovation, a deep acknowledgement of a single veteran’s service, a thank you to all of all veterans who serve, and a 90th birthday celebration of the greatest long running musical institution America has ever known.

I snuck out to the gift shop after the first show to try and buy a show poster for Josh, and was immediately swarmed by people who’d seen the performance, many of them Vietnam Veterans. They wanted to thank Josh, thank the Opry, thank SongwritingWith:Soldiers, and hug me. I mumbled a few words about gift shop and a poster and suddenly a dozen people were handing me their newly purchased show posters, trying to give them to me to give to Josh. I accepted one, thanked the person who gave it to me, took some pictures with folks, and made my way backstage to prepare for the second show.

It happened again at the second show—ovation, tears, and emotional connection.

A little taste of heaven on earth: a sense of purpose bigger than us all. Josh kept saying how much he felt like his story could help other veterans, how it was like he was part of something bigger than himself.

That’s how we all felt.

It was teamwork that made this event possible. SongwritingWith:Soldiers brought us together. Veterans Airlift Command provided free air transportation, flying Josh and fellow SW:S combat veteran Rob Spohr to Nashville from New York pro bono, and the Opry opened their arms and graciously worked with us to make the night possible.

In a time when almost all the news on TV is bad, when we are on the verge of new wars, new terror attacks, and new threats of all kinds of violence, I am grateful for the power of song to open hearts, and for the power of love to bring us together.

In the end, it’s simple really.

Working with others for the greater good = joy.